Tips for Choosing an Instrument

The following advice is aimed at folks new to this ‘people music’. After long and careful consideration, we’ve formed certain opinions about what a beginner might want to think about when wondering how to approach playing by ear, and in particular, which instrument to play. I emphasize the word opinions; these aren’t facts. Some (or many?) may disagree with us, so do get a ’second opinion’, mull it over, and then go for it. 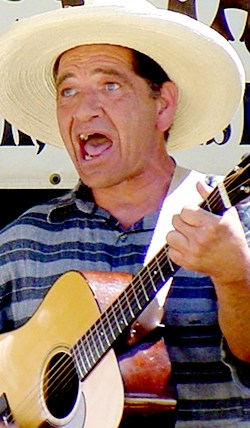 Don't be shy—belt it out!

Sing! This is the instrument you were born with. Thus you have a great advantage by using it, not only for the sheer joy of singing, but as a stepping stone to playing intuitively.

We personally hold singing to be the quickest and simplest path to playing by ear. Sure, you can learn to play an instrument without ever singing, but by ear? And as quickly? Unlikely, unless you’re a child or are unusually talented musically. So, make singing a first priority.

For singing, banjo and mandolin are good choices, but the guitar is ideal. You can easily learn a few chords and strum the basic strum, which gives you a steady rhythm and a nice full chord sound. This makes singing in tune far easier.

We deem the guitar to be the foundation for this ‘people music.’ Most people we know who play this music can play ‘basic’ guitar, even though many play a different instrument most of the time. The same cannot be said about any other instrument. That tells you something right there. 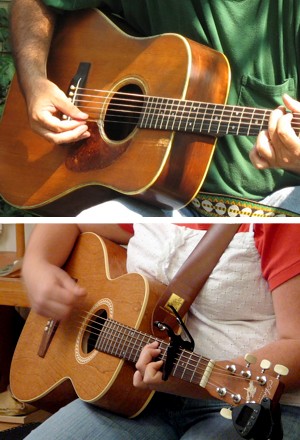 Two sizes of steel-string guitars.
Above: a larger 'dreadnought' guitar.
Below: a smaller 'parlor' guitar (with capo).

If you are an adult beginner of average musical talent and wish to sing, consider starting with the guitar. At least learn the ‘basic’ four chords, the ‘basic’ strum, and ‘basic’ picking. With four chords, you can play hundreds of songs—in two keys right away, and in every key once you get a capo! And this will prepare you for any instrument you may be drawn to play in the long term.

If the guitar feels too big for you to hold and play comfortably, keep in mind that they come in many sizes, from the large, so-called ‘dreadnought’ guitars, to the smaller ‘parlor’ guitars which are better suited for smaller bodies. Go to a music store and try out the options.

Also, note that almost everyone who plays this music uses a steel-string guitar, as opposed to a ‘classical’, nylon-stringed one. While they sound pretty, nylon strings lack the power and volume needed to play (unamplified) in a group. If the guitar you have was built for nylon strings, re-stringing it with light steel strings should be fine in the short-term, but in the long term you’ll want to invest in a steel-string guitar. 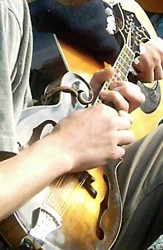 The eight strings of the mandolin are tuned in pairs to match the four strings of the fiddle, which makes the two instruments natural compliments of each other. You might say that the mandolin incorporates some of the best features of the guitar and fiddle: the fretted strings and use of a pick give it a distinctive rhythm backup role in this music, while the simple, ‘rational’ tuning of the fiddle means that instrumental solos can really ‘fly’ around the fret board. 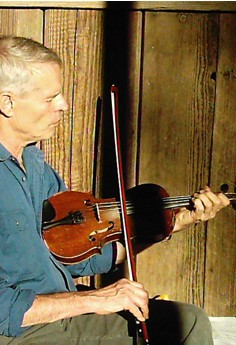 Fiddles can be played any way you want.

Many assume that the fiddle is the hardest instrument to learn. This is simply not true! In our beginner classes, it is often the fiddlers that pick up the melody-playing the quickest. Both fiddle and mandolin are extremely well suited for playing melody; their smaller size permits them to be tuned much ‘simpler’, making them the easiest instrument to play intuitively—in any key!

The main disadvantage of the fiddle is that you can’t really make chords to accompany your voice. That said, you can certainly sing when playing fiddle; if you’ve got another person to keep the rhythm and chords then you’re all set. 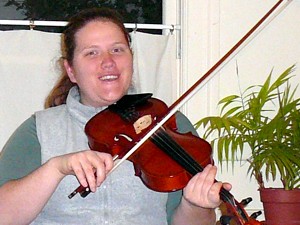 And yes, you can sing with the fiddle.

The challenge with the fiddle (or ‘violin’… same instrument) lies not in its lack of frets but in the use of a bow. This also gives the fiddle its most distinctive aspect: its soulful voice. It, more than any other string instrument, sings.

And about those frets? Use some tape! Really, there is no shame in this; in fact, we highly recommend this to everyone. Measurements to help you find where to put the tape are provided in our books—you can also use a tuner or ask someone at a music store. Eventually your fingers will get used to the spacing and you won’t need the tape. It’ll fall off soon enough anyway.

There are two main styles of banjo playing: the ‘bluegrass’ and ‘old-time’ styles. Each style has its advantages, and eventually you may learn both, as many banjo players do. Initially, however, it is probably best to concentrate on one or the other. 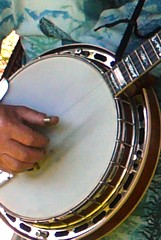 The ‘bluegrass’ style is also called “Scruggs style,” after Earl Scruggs, who was the first musician to really perfect the three-finger style of picking and bring it to the “mainstream” of what was then evolving into ‘Bluegrass music.’ The ‘rolls’ used in three-finger picking really drive the music and lend a distinctive sound—in some ways, the Scruggs-style banjo is the sound of bluegrass music. However, the three-finger banjo picking style may require more talent than the other string instruments. Getting the thumb and the two fingers to switch back and forth—between rolling in rhythm and picking the melody without missing a beat—takes extra coordination. 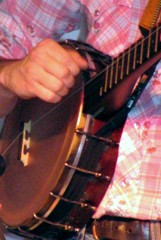 The ‘frailing’ or ‘clawhammer’ style of banjo harkens back to the time before fingerpicks were used, before the word ‘Bluegrass’ was invented, back when a lot of music played in rural America was nothing more than a banjo, fiddle and singing. The sound of frailing banjo playing is mellower and less ‘sharp’ or ‘driving’ than that of bluegrass banjo playing. In addition, frailing suits those for whom the three-finger rolls of the bluegrass banjo are too daunting. This style of playing has a rhythm similar to the other instruments, especially the fiddle ‘shuffle’, and so may be easier to pull off that the three-finger banjo style.

Either way, don’t freak out about making ‘the right choice’—it’s not a big deal. Whichever style you decide on, your main task will be getting the right-hand movements down. The left hand, in comparison, is a walk in the park; the open tuning of the banjo means that you can pick any string and sound good as long as you’re in the right chord! 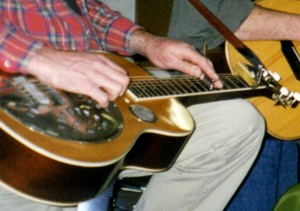 Physically speaking, the Dobro is easier to play than the other five instruments in certain ways. It is played with a bar made of solid steel. The bar has some weight to it, so there’s no need to press down hard on the strings (making this easy work for arthritic fingers). Furthermore, the open tuning of the Dobro means that as long as you’re on the correct chord (i.e., the bar is in the correct position) any string you strike sounds good.

While the Dobro uses three-finger banjo picks, not all Dobro playing is roll-centric. In fact, many Dobro players will go a whole song without using a complete banjo roll. This avoids some of the difficulties of three-finger banjo playing. It still doesn’t lend itself to strumming backup for singing as well as the guitar, though. 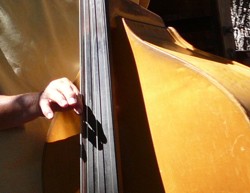 The bass plays a very subtle yet profound role in the ensemble playing of this music, although playing it alone would not be satisfying. It gives a bottom beat that supports all the other players. That you really notice it when it is missing from a jam is a testament to its importance. And if you already have some experience with another instrument, you can learn to play bass over a weekend.

And for the kids…

While not usually played in this kind of music, a ukulele is a great instrument to start out with, due to its small size. They are tuned similarly to guitars, and so learning ukulele prepares one well for guitar—especially if you have a baritone ukulele with a low “D” string. Book owners can download the full ukulele reference page on our website.

(Another alternative: if six strings are too many, just take off the two thickest strings of your guitar!)

Young kids don’t have the same difficulties with music as adults have, so any instrument they’re drawn to may be the best place to start. ‘Half-size’ (or smaller) fiddles suit the very young since their hands can navigate the fingerboard with ease, and their youthful flexibility is a big plus in bringing the bowing hand to life. For the mandolin, just remove one string of the pair.

Another alternative is the baritone ukulele; see the box on this page. Anything a kid learns on a baritone ukulele transfers over to the regular guitar when their growing hands are ready.

Whatever you decide to start with, you can always learn a new instrument later on. In fact, we highly recommend learning more than one in the long run.

Some folks think that learning a second instrument will confuse you on the first. In fact, the opposite is true! Time after time, we’ve seen that learning a new instrument just makes you better on the old one; sometimes in surprising, unexpected ways. The main process in learning an instrument (any instrument) is getting comfortable with music itself—and that’s something that applies to every instrument.

Above all: if by chance you’ve “always wanted to try X” (banjo, fiddle, mandolin, whatever) but avoided trying because of X, Y, Z (it seemed too hard, you couldn’t find a teacher for it, etc.)… we say, go for it! Follow your passion, and have fun!