Click any song for lyrics and a free audio clip.
A speaker icon means a recording is available.

Most of the songs featured here are also available (with chords) in our songbooks.

What is ‘Mountain Music’?

The songs here are old, pre-radio songs. Many come from the rich musical traditions of 19th-century Appalachia. Thus, they have a special, “stood the test of time” quality to them.

Mountain music comes from two very distinct and age-old musical traditions: African and European. These traditions blended into what is informally known as “mountain music” through years of cross-pollination in the impoverished rural mountains of Appalachia (USA) during the 1800’s.

This combination of melodic and rhythmic styles became the foundation for jazz, blues, rock and roll, country, bluegrass, modern folk and more. It is this unique “synthesis” quality that makes “mountain music” a perfect launchpad for those ‘modern’ styles and a perfect ‘home base’ for followers of other styles to come together.

Most of these songs in the public domain, though a few may not be—it can be very hard to tell sometimes. Some are traditional songs with no known author, others were originally old parlor songs that have gone out of copyright. However, they all “traditional” in the sense that they have entered the oral tradition.

We picked 100 songs that represent some of the best and most commonly-played songs in ‘people music’. They're featured in our songbooks as well as a CD series; see below.
[core] indicates a "core song."

Books and CDs with these songs: 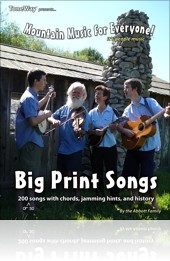 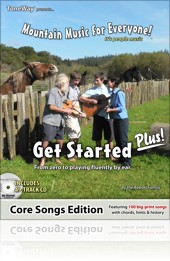 Get Started Plus!
Core Songs Edition

Like Big Print Songs, except only the 100 Core Songs are included. But you also get our acclaimed playing-by-ear learning method, a 49-track companion CD, and supplemental online instruction videos.
Read more and look inside. 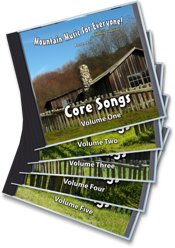 Five CDs, 100 songs or 100 songs in MP3 format for a discount. Recordings from the Abbott family and their friends.
Listen to samples and buy. 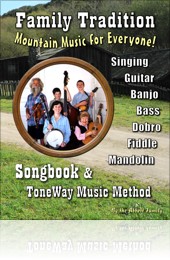 A compact reference book with lyrics and chords for 330 songs. Includes a full ToneWay Music Method reference.
Read more and look inside.